Several months ago I picked up a Symmentricom GPS Time and Frequency Receiver in the hope to create a 10MHz Frequency Reference for the lab. The unit was designed for telecommunications use so runs from a 48VDC power supply and outputs 2.048MHz rather than 10MHz, however I was hopeful that I’d be able to obtain 10MHz from the unit in some way.

Fortunately the OCXO inside the unit was a 10MHz device so obtaining the 10MHz output would not be a difficult task. Had the unit not featured this device I would have used a separate 10MHz OCXO and created a PLL to lock the 10MHz oscillator onto whatever frequency OCXO was used within the device.

Other than the 10MHz output, I decided that it would be a nice feature to be able to use the Time of Day output from the device and also to jazz up the front panel with a display capable of showing some status information.

In this video I explored the Time of Day output from the unit and interfaced it with a Microchip dsPIC30F3013 16-bit Microcontroller to display the time and date information on a 20×2 Noritake VFD.

Following on from that video I started designing a PCB to make the modifications permanent.

Starting with the microcontroller, I laid out the fundamentals for running the dsPIC30F3013 – ICSP interface, crystal oscillator, decoupling capacitors etc. 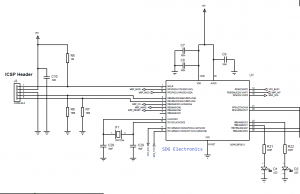 Unfortunately, it looks like the EMUC3 and EMUD3 CANNOT be used for general programming and debugging. This is a mistake on my PCB and PGC and PGD must be used instead!

Keeping with the 48V supply for the GPSDO, I simply used an XP Power DC-DC converter for the 5V supply to the PCB:

I then added the VFD interface in the same manner as on the breadboard rig to minimise any changes to the firmware: 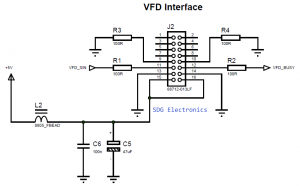 Then added an RS485 transceiver to allow data to be streamed out of the unit on a multi-drop network. A header for 100ohm termination resistors was also added: 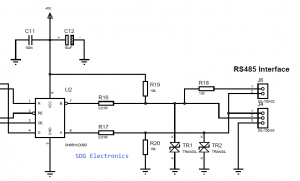 The 10MHz amplifier and attenuator was designed. I simulated this in Linear’s LTSpice to make sure this would work correctly. The bias resistors keep the signal centred around mid-rail after being capacitively coupled to the circuit. The negative feedback amplifier adjusts the output to 1V p-p for my equipment. 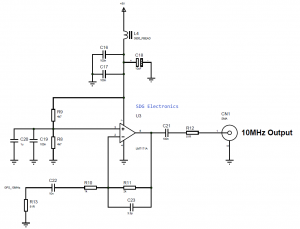 A new addition to the schematic was Microchip’s MRF24J40MC 2.4GHz transceiver device. This is something which I’m planning to add to many future devices and will allow the time to be distributed around the house. These devices are super cheap and a really nice design, although the Microchip MiWi stack looks a bit overcomplicated for my use, so I may trim this right down to the essentials for use here. 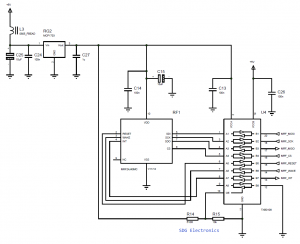 The overall schematic can be found here: GPSDO PDF

The PCBs were ordered from Elecrow in China and arrived within 7 days of placing the order! You can see the modifications for the ICSP header made with some Kynar prototyping wire. 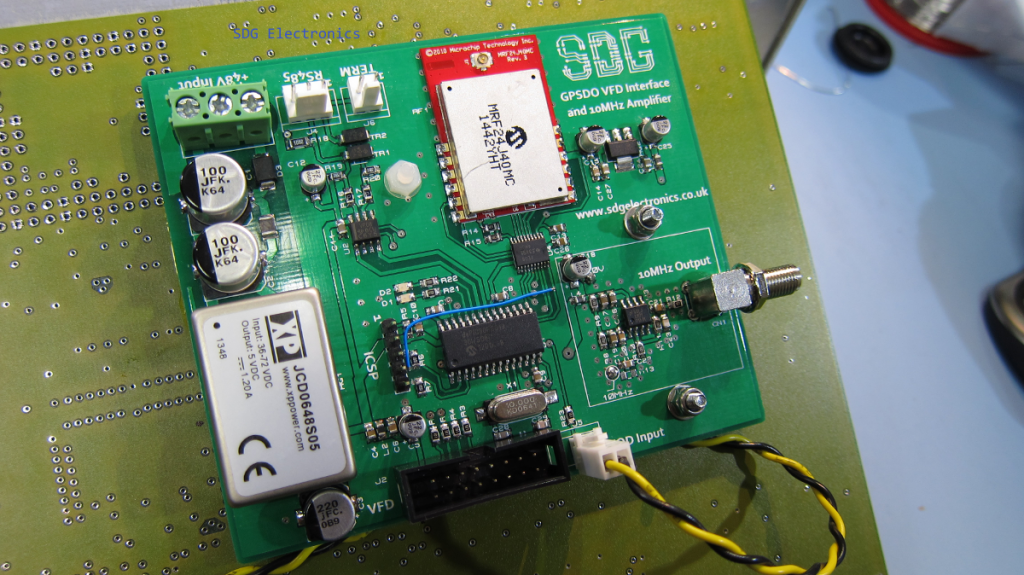 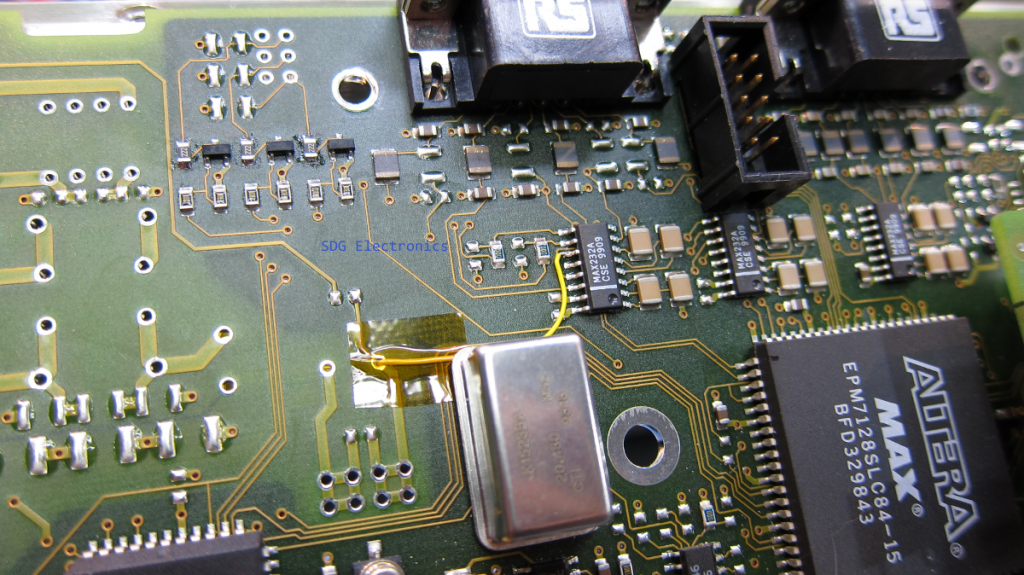 Tapping off the MAX232A for TOD Output 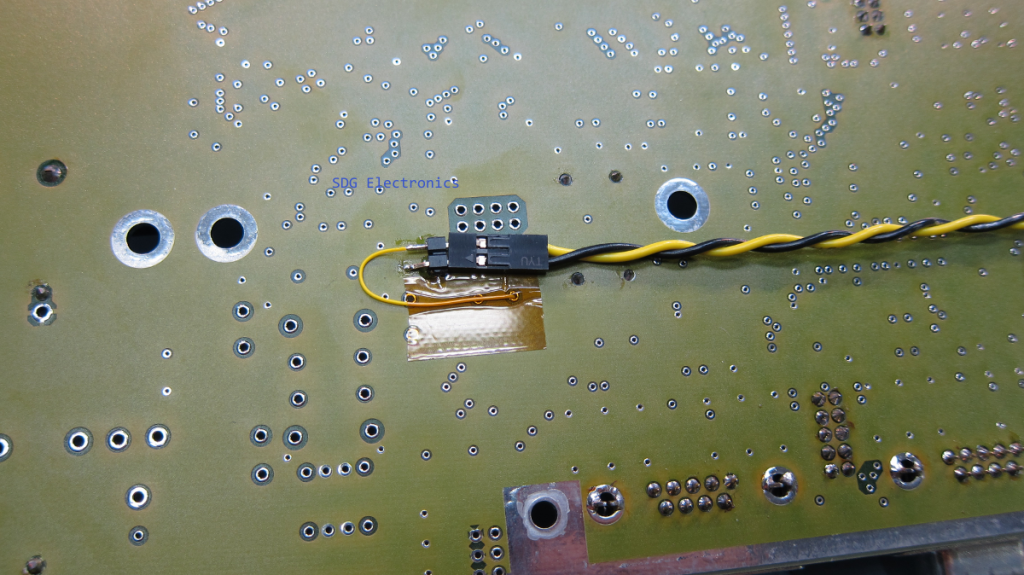 Time of Day Header on Reverse of PCB

A 2 pin header was mounted on the reverse of the GPSDO PCB to attach to the new PCB. Next a 48V 100W Meanwell Power Supply was added to the chassis. 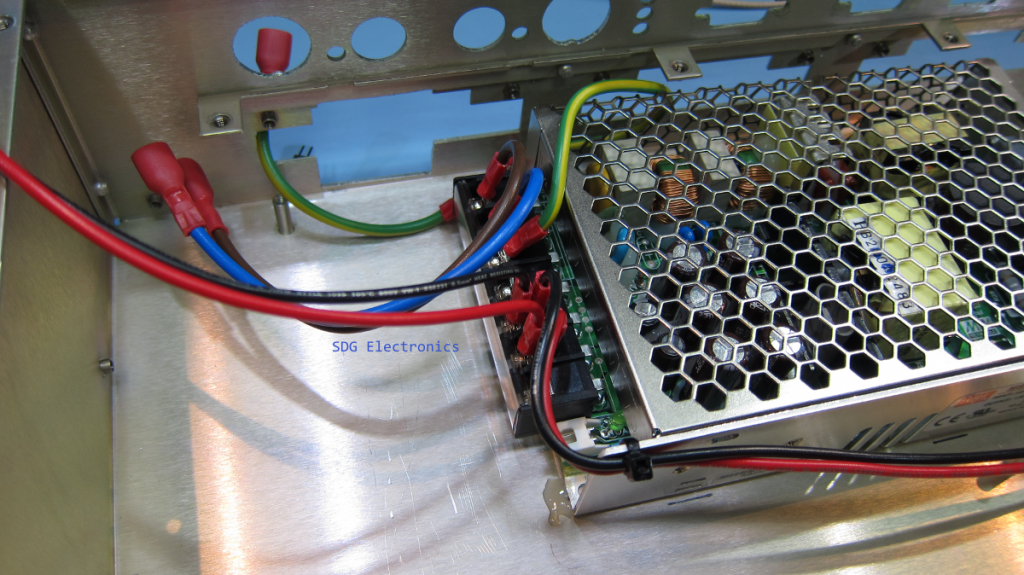 Next the VFD was attached to a new front panel I had manufactured at Schaeffer AG designed to fit in place of the original front panel. 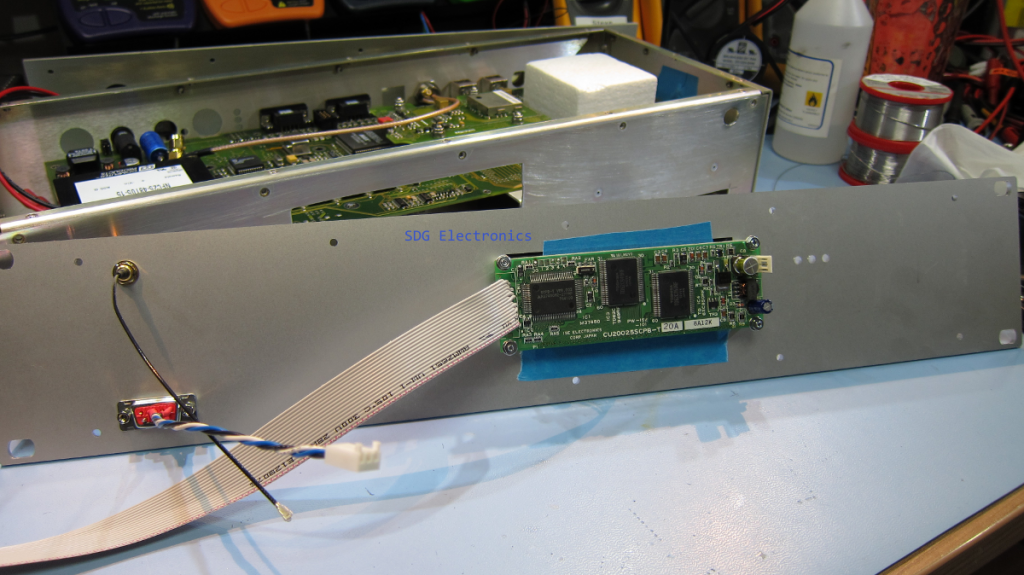 Mounting the VFD to the Front Panel

Finally, the unit was assembled together along with a new IEC connector on the rear for the mains inlet. A new BNC connector was also added for the 10MHz Output. 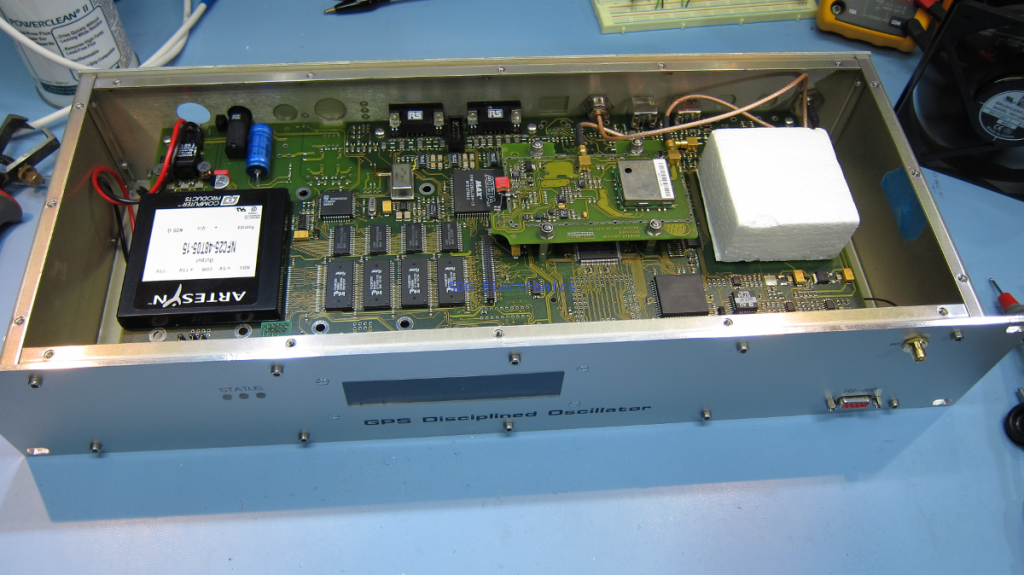 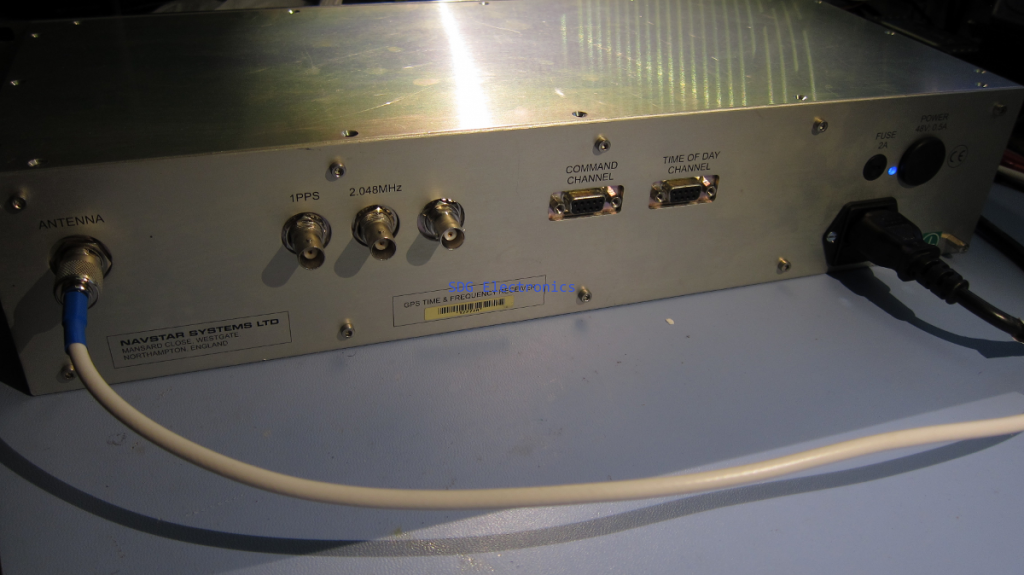 Finally the device was powered up and tested. All working! 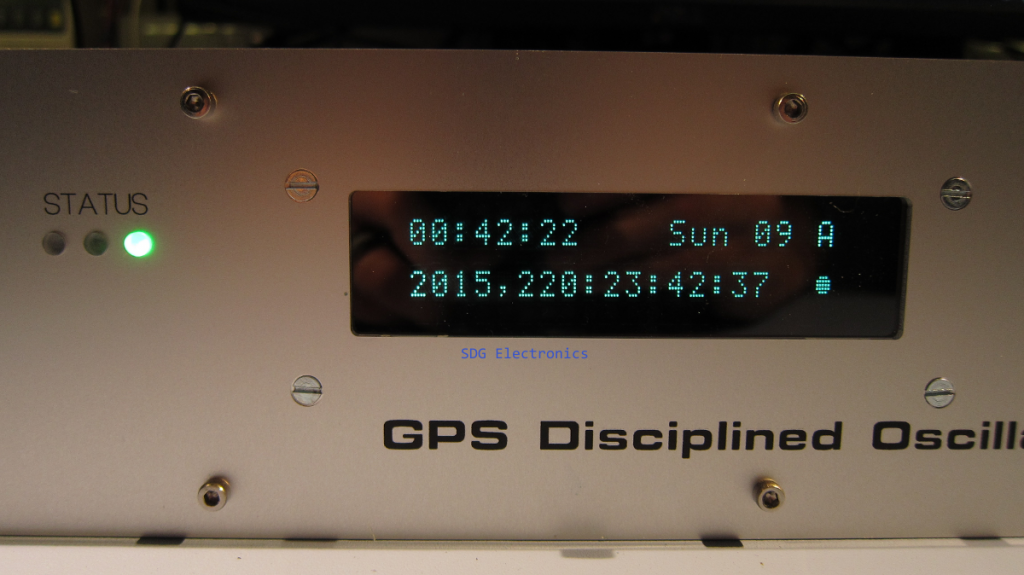 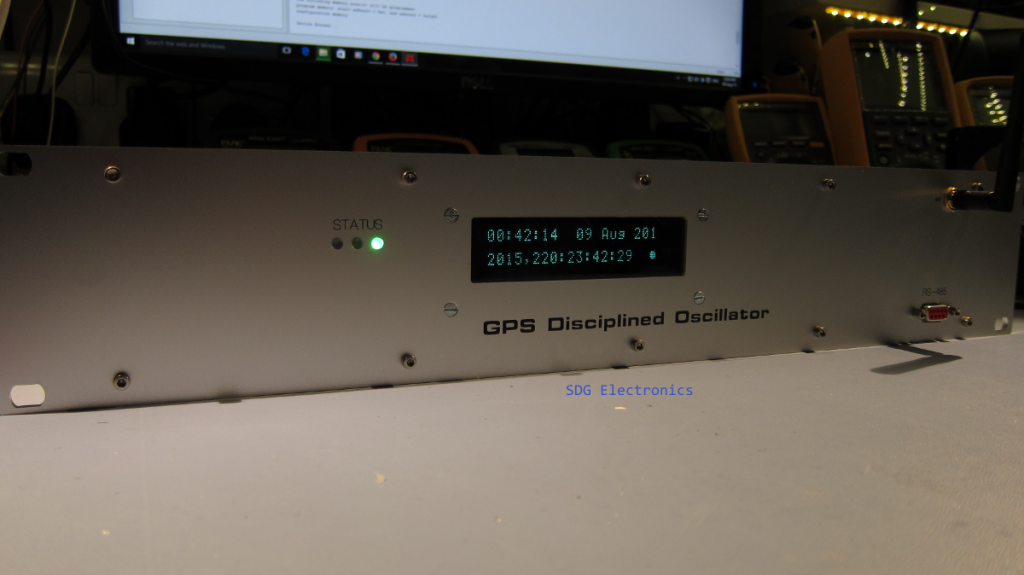 You can see the video of the final modifications here: